Saturday, January 18
Trending
You are at:Home»Uncategorized»#OrphanBlack Recap: Community of Dreadful Fear and Hate 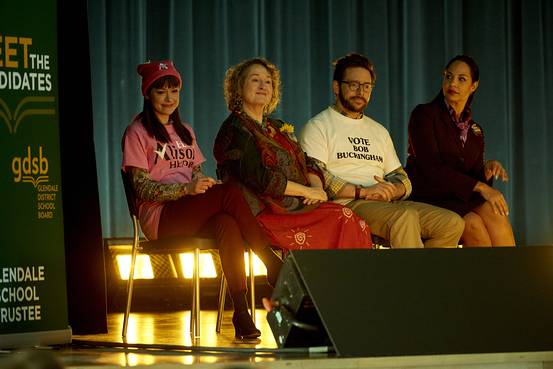 The idea of choosing our own families, or rather the inability to do so, runs throughout tonight’s “Orphan Black.” “You can’t have Sarah without the rest of her family, I’m afraid,” Mrs. S. tells a livid Helena. So far this season, most of the Leda clones have been on their own paths, voluntarily or no, but in “Community of Dreadful Fear and Hate” — aka the Alison Hendrix comedy hour – their lives are starting to converge again. I suspect they will have to rally as a team before this season is out.

Helena and Sarah are on their way back from Mexico. Felix, needing a distraction “while Siobhan ferries Sarah back from Hotel Castor,” is working as Alison’s campaign manager. And Alison’s interactions with both Felix and Cosima start slowly pulling her back into the larger story line — or at least making her aware of all that is going on.

With the exception of the Rachel/Scott developments, however, tonight’s episode mostly ignores the series’ larger plot and focuses on Alison. If the goal was to write a classic dramatic farce, the show succeeded — there were some genuine guffaw-inducing gems. But as much as I’ve championed Alison’s story this season, and savored the comic relief of the hilarious Hendrixes, I’m somewhat torn about tonight’s tone. On one hand, after last week’s intense and tragic (RIP Paul) episode, perhaps we needed a fun episode like this. On the other, something didn’t quite click. For me, that was largely related Cosima’s story (more on that in a bit.)

What I did love, though, was finally meeting a character frequently alluded to in the past but never seen on the screen until tonight – namely, Alison’s hypercritical mom, Connie Hendrix (played by Sheila McCarthy, the real-life mother of associate producerMackenzie Donaldson.) The absolute joy on Alison’s face when her mother praises her speech is truly touching. Tatiana Maslany does a superb job of showing just how much Alison, even if she may deny it, craves and blossoms in the face of her mother’s approval. Doubly impressive is the subtle way Ms. Maslany portrays that joy quickly fading to a resigned resentment when Connie, in the same breath, tries to encourage Alison to leave Donnie for Jason Kellerman.

Tonight really was all about Alison, so that’s the best place to start in our clone-by-clone break down of the night: 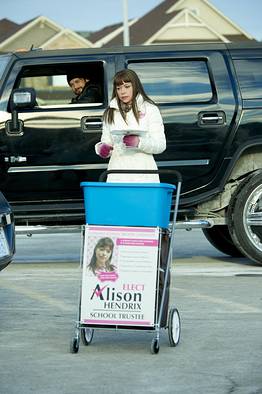 ALISON: Juggling a very full to-do list. She needs to turn in her election signatures, get her mother to sign over Bubbles and make it to the school trustee candidate mixer on time. Meanwhile, Donnie needs to go with Jason to buy $30,000 worth of pills from the crime lord who cut off Vic’s finger in Season 1. Donnie grabs the wrong envelope — the signatures instead of the cash — and a veritable comedy of errors ensues. At stake? Donnie’s nose. For sure, there are plenty of laughs here. But, as mentioned before, what really stood out is Alison’s relationship with her mother, for whom no one is ever good enough (except maybe Jason Kellerman.) Alison’s mom has a Marci Coates campaign poster hanging in her shop, and she loathes Donnie, whom she calls Mr. Chubbs. But that isn’t commentary on his physique — that’s really his name, Donald Frances Chubbs. He took Alison’s name at Connie’s insistence. Also, we learn that Connie, wanting better breeding stock and without telling Alison’s dad, sought an “upgrade” at the fertility clinic when they supposedly conceived Alison in vitro. Alison’s vengeful, and potentially dangerous, decision to introduce Cosima to her mother as “my clone” proves fruitless. Her mom laughs it off.  And with that Cosima-as-Alison kiss, the verbal sparring with Donnie and sweet talking of Connie, Jason finally makes his true intentions toward Alison known, just when the Hendrix marriage has never been stronger.

COSIMA: Impersonating Alison. A clone pretending to be another clone is always a hit with fans and is a time when the consistently excellent Tatiana Maslany particularly shines. But of all the clone-as-another-clone bits we’ve had on the show, this was my least favorite. The fault wasn’t with Ms. Maslany. She was stellar. But the premise itself felt forced. Even though I did giggle like a 10-year-old a couple of times at Cosima insisting, “I need pee,” we never got any real explanation for why she needed it beyond just a general distrust of Delphine. Rather, it seemed like a plot device contrived solely to get Cosima in place so we could have another clone-imitates-clone bit, one that was cute but really didn’t further the plot. It struck me as out of character for scholarly Cosima to let her personal paranoia get in the way of hard science, let alone her health. Yes, she’s been more open to the metaphysical since her brush with death and is currently dating a holistic healer, but she’s still Team Science all the way. Her health is declining – she is coughing more than she has in a while – and I would think she’d want answers. By the episode’s end, she is bleeding in a bathtub and has confessed some of the details of her illness to Shay. 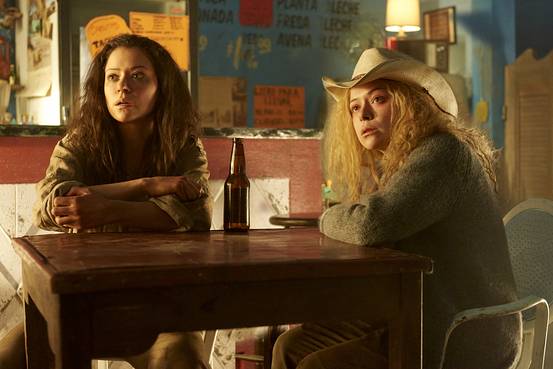 Tatiana Maslany as Sarah and Helena in “Orphan Black”

HELENA: Hugging it out with Mrs. S. …Well, eventually. First she wants to kill her. “First I eat; then we fight.” Mrs. S refuses the fight, noting that Helena is pregnant. Helena wants to know why everyone is so concerned about her unborn child, and Mrs. S asks her how she’ll provide for the baby. Remember Jesse, the guy in the bar who captures Helena’s fancy in Season 2, Episode 6? Helena says she’ll seek him out and they’ll raise the baby together. Will we see Jesse (played by Patrick J. Adams of “Suits”) again this season? The actor has said he’d love to come back.

SARAH: Staying out of Helena and Mrs. S’s way. She follows the advice of a bartender in Mexico who suggests she take a shower, leave them alone and let them sort it out for themselves. “Go wash off where you’ve been,” the bartender says. “Where you’re going will be better.” Later, Sarah breaks the news about Paul to Mrs. S.

RACHEL: Learning medieval farm building. Not really. She doesn’t truly want to learn the board game, Agricola, that Scott volunteers to teach her, even if she’s bored. Rather, it’s all a ruse to let the two of them discuss Ethan Duncan’s code in private. Scott hands her a pencil (she doesn’t flinch!) and a photocopied page from “The Island of Dr. Moreau.” Rachel starts drawing boxes and lines in the text, but when Scott asks her what it says, Rachel replies, “I’ll only tell Sarah.”

*Tonight’s episode title Eisenhower quote: “Down the long lane of the history yet to be written America knows that this world of ours, ever growing smaller, must avoid becoming a community of dreadful fear and hate, and be, instead, a proud confederation of mutual trust and respect.”

*The book Rachel is reading is “Bulfinch’s Mythology,” a 19th century compilation, now in the public domain, of not only Greek and Roman mythology, but Arthurian legends and medieval romances as well.

*I’m kind of amazed Cosima was able to keep up her charade of Alison as well as she did. Does no one notice that “Alison” keeps changing shirts and shoes? At least Cosima’s and Alison’s pants sort of match — and of course the t-shirts and toboggans.

*I loved the parallels of Sarah’s conversation with Mrs. S juxtaposed with Alison’s speech (for example, Sarah calling Mrs. S “mum” right as Alison is saying, “I will be your mother hen, and I will keep our chicks together.”)

NEXT WEEK: Helena moves in with the Hendrixes, and Rachel confronts Sarah.