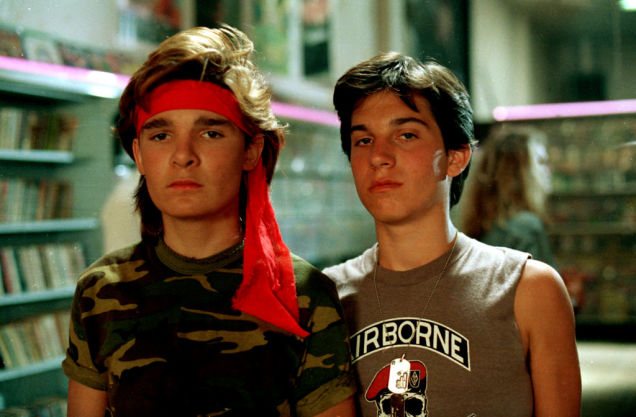 Horror-movie heroes rarely exist in a vaccuum. There’s always some kind of supporting character who’s helping them (or goading them, or antagonizing them to the point of doing the right thing). And often, these supporting characters outshine the leads. Here are 10 horror movie second bananas who are way better than the hero.

1. The Frog Brothers in The Lost Boys

Working in a comic book store was just their cover. They’re dedicated to a higher purpose: fighting for truth, justice, and the American way, all the while rocking Rambo-inspired fashion and schooling new kid in town Sam Emerson in the ways of vampire detection and eradication. Corey Haim and Jason Patric may have portrayed the two main brothers in The Lost Boys … but Edgar (Corey Feldman) and Alan (Jamison Newlander) Frog handily steal every scene they appear in.

Diminutive actress Zelda Rubenstein played Poltergeist‘s most enduring character, spiritual medium Tangina, who’s summoned to help the Freeling family when their daughter is sucked into paranormal limbo. High points of the performance include Tangina’s epic monologue explaining the “light” that’s so confusing to the film’s ghosts (“These souls, who for whatever reason are not at rest, are also not aware that they have passed on”), and of course her confident (if somewhat inaccurate) declaration that “This house is clean.”

Because anytime there’s an immortal talking cat that’s actually a 17th century teen rebel living under the curse of three witches … who steps up to help the 20th-century kids he befriends defeat said witches … fan-favorite status is pretty much assured.

4. Annie and Lynda in Halloween

Yeah, original scream queen Jamie Lee Curtis certainly leaves an impression as no-nonsense babysitter Laurie Strode. But her boy-crazy besties Lynda (“Totally!”) and Annie (whose reaction to spilling butter on her clothes is to strip down immediately) enliven the movie both as comic relief and artfully annihilated Michael Myers victims. If we didn’t care so much about this giggly twosome, the movie’s carnage would sting much less. Image via the Film Reel.

We hesitate to refer to Quint as a second banana, lest the ghost of Robert Shaw appear and menacingly scrape his fingernails down a chalkboard to announce his presence. Shaw got the role after Lee Marvin and Sterling Hayden passed, and it’s impossible to imagine anyone else playing the grizzled, seen-it-all shark hunter. The below scene, in which Quint explains in gruesome detail the origins of his anti-shark vendetta, is among the most hypnotic in a film that otherwise trades more on suspense than atmospherics.

Neve Campbell’s stalker victim Sidney was a tough cookie, but her survival owed a debt to her geeky friend Randy, the audience stand-in for every kid who’d grown up devoted to the noble study of slasher flicks. When the high-school body count starts piling up, Randy steps forward to elucidate the well-defined rules of horror films: “The police are always off track with this shit! If they’d watch Prom Night, they’d save time! There’s a formula to it. A very simple formula! Everyone’s a suspect!” Though the self-reflexive slasher would become pretty played out in the wake of Scream‘s sequels and imitators, we have Randy to thank for bringing the genre to a new level.

7. Hortense Daigle in The Bad Seed

Let us now sing the praises of character actor Eileen Heckart, whose every appearance as a sloppily drunk grieving mother … as unsteady on her feet as she is certain that little Rhoda (Patty McCormack) had something to do with the death of her son … elevates The Bad Seed from melodramatic chiller to surreal work of art. Her scenery-chomping work earned her a well-deserved Oscar nomination for Best Supporting Actress. Image via And the Nominees Are.

8. Sex Machine in From Dusk Till Dawn

When you unknowingly stumble into a biker bar that’s infested with vampires, you’re going to need all the help you can get. And if there’s a guy named Sex Machine (legendary make-up artist Tom Savini) — who’s handy with a whip and has a crotch gun at the ready — in your corner, all the better. In a movie that’s otherwise best-remembered for Salma Hayek’s snake dance and George Clooney’s haircut, Savini’s supporting man of action also leaves a lasting impression.

The second animal entry on this list is Inga, the heroic chimpanzee companion to Donald Pleasence’s kindly professor in what might be Dario Argento’s weirdest movie (which is saying a lot). No less an authority than Joss Whedon named Inga one of his favorite horror-movie characters, telling Entertainment Weekly:

”That movie is just so ridiculously chock-full of horror — there are terrible murders, Jennifer Connelly just happens to have control over insects, there’s a crazy person living nearby. By the time you get to monkey with a razor blade [which saves Connelly’s life], you’re just like, ‘Oh my god!‘ If you look at Cabin in the Woods, you can see the influence of, Oh, you mean you we can just never stop coming up with stuff? Now, there’s a monkey with a razor blade in [the 1988 horror film] Monkey Shines, too. But the one in Phenomena is more sympathetic.”

10. Dr. Pretorius in Bride of Frankenstein

Dr. Frankenstein’s creepy mentor, memorably (and campily) played by Ernest Thesiger, is even more of a mad scientist than his protégée, with a sinister cackle to match. He also gets all the good lines in the film, including “To a new world of gods and monsters!”