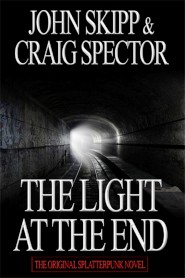 Diamonds in the rough for fright fans.

I’ve been reading horror since I was a kid. I was a lummox, you see, and my parents were pleased to see me readinganything. They weren’t too fussed about what may have been sandwiched between the covers of the books I carted around. If they had looked at those covers, they would have seen the odd skeleton cheerleader, plenty of blood-dripping knives, and fangs. Lots of fangs.

Having read a great deal of horror books, I thought: Why not share some of the littler-known horror gems I’ve stumbled across? I’ll assume you’ve read the old standbys that usually make lists of this sort, your Shinings andHaunting of Hill Houses. Those are great books, their place in the hierarchy unassailable. These are books by—in some cases—writers who are not yet well known, or perhaps earlier books by well-known writers who could use a little shine. The list leans towards the more . . . erm, visceral side of the horror ledger. No excuses there. I likes them how I likes them—raw. 1. The Light at the End by John Skipp and Craig Spector – Vampires aren’t really my bag. Which is strange to say, seeing as there are two vampire books on this list. John Skipp and Craig Spector were the enfant terribles of nineties horror—they started a groundswell movement in the genre known as “splatterpunk,” which was basically a casting off of the moody, bloodless breed of narrative their predecessors of the Shirley Jackson ilk trafficked in. Splatterpunk was about being extreme, over the edge. This is the best of the six books the duo wrote together. A vampire tale that is rough, brutal, funny, and boundary-breaking in its way. 2. Swan Song by Robert McCammon – McCammon is a marvel. He began his career writing fireballing horror books, morphed in midcareer to writing realist tales with dark overtones (Gone South, the masterful Boy’s Life) and now is writing historical fiction. If the name is not familiar to you, it ought to be. I’ve chosen Swan Song—a slobberknocking 900-pager concerning the aftermath of a global holocaust—but it could as easily be a half-dozen others. They’re all gold. He makes you care deeply about his characters, takes huge risks, and writes with a ton of heart. One of my favorite writers, period. 3. The Elementals by Michael McDowell – McDowell had a varied and very interesting writing career. He scriptedBeetlejuice, the Michael Keeton starrer, and had an enormous output of novels in several genres before dying too young of an AIDS-related illness. The Elementals concerns a rich, dandyish southern family’s sojourn at a vacation spot deep in the south: a trio of old houses at an isolated beach, one of which is haunted. Never could I have imagined that sand—drifting, cresting, ceaselessly moving sand—could be terrifying. Well, McDowell manages it. Beyond that, he gets the members of his southern clan exactly right: you may not like them, but still, you sense them as real and vital people and as such are moved by their trials. 4. Every House is Haunted by Ian Rogers – This perfect little spider’s web of a debut story collection knocked me out of my boots a few years ago. Rogers had placed his stories in venues like Cemetery Dance, places where keen horror readers are always attuned for the next big breakout writer. So when Chizine press collected Rogers’ work in one handy-dandy volume that fairly pulsated with bad intentions, well, I was sold. The standout novella, The House on Ashley Avenue, has been optioned for TV; I would love to see it hit the small screen someday. 5. The Girl Next Door by Jack Ketchum – Ketchum is a horror writer’s horror writer. He is adored by the cognoscenti, and has a large readership outside of that, too. Perhaps not as large as his talent deserves, but that’s partially a product of his own interests and outlook. He is . . . intense. He might be a puppydog in real life, but his books are strong medicine. There are horror books that scare you while you’re reading them, but that fear doesn’t travel off the page. Ketchum’s work, man, itfollows. It’s a lost, hungry hound—it’s going to dog you, track you, scratch and claw inside your heart and head and make a home. You can’t unread a Ketchum book, okay? So fair warning. The Girl Next Door is 100-proof horror. I don’t know what else to tell you. But it’s brilliant, too. It’s real-life horror, so believable and psychologically astute that it might just change you in a profound way. If you’re in need of that kind of a change, well, fill your boots. 6. The Damnation Game by Clive Barker – Barker’s the second head of my own personal horror Cerberus, the other two heads belonging to Stephen King and McCammon. The Damnation Game is his first novel, after his genre-altering Books of Blood series. It’s brilliant. It’s got everything that clearly fascinates and repulses Barker in equal measure. It’s got the sex and violence co-mingling that he’s practically stamped a patent on. There is no better pure writer, sentence by lush sentence, in the horror cosmos than Barker. His imagination beggars imagination . . . yeah, I just wrote that. 7. City Infernal by Edward Lee – Like Ketchum, Lee’s a writer who horror nuts know and generally love—and if they don’t love him, well, at least they know what they’re going to get. Lee issplendiforously profane. He doesn’t just step over the line of bad taste: he hurdles it gleefully. If I were a real jerk I’d recommend some of Lee’s more riotously offensive work like The Bighead orHeader, but because I am generally benevolent and don’t want the headache of multiple lawsuits, I will steer you towards City Infernal. It’s tamer Lee, where he envisions hell as a city. Quaint, by his standards. 8. Geek Love by Katherine Dunn – You’ve seen this book on a lot of “best of” lists, perhaps. It deserves it. It’s not straightforward horror like some of the other books here. It’s horrific, but it’s the horror of a certain kind of familial love, you could say. There are books that create a world and pull you in and it’s like slipping underwater: you’re deeply entrenched with those characters, that story, until the book ends and you can surface for air. Geek Love is one of those rare books. Take a deep breath. 9. Enter Night by Michael Rowe – This is the other vampire book. You don’t know me, I’m just some schmo writing a list, but trust me on this: if I like a vampire book, it has to be one hell of a read. And this one is. Rowe pulls the reader in slowly and uses his remote Canadian setting to great effect. There is nothing gory or outrageous on display—Rowe wants to scarethe reader, that is clearly his express mandate, and he is so well-versed in the trappings of fear, the slow accumulation of dread, that you will likely have to take breaks while reading this to unkink your tensed-up muscles. 10. Ghost Story by Peter Straub – I hesitated to put this on, only because I’m not sure anyone could label Straub or his masterwork “little known.” Straub is a titan of the genre. He’s probably the most purely literary horror writer we have, along with Ramsay Campbell. And Ghost Story—which Stephen King famously called “a tiger tank of a book, made of iron and well-nigh unstoppable”—is, I suspect, quite well known outside of the horror genre. It’s one of those exceptional works that, while written primarily for horror readers, is so wonderful that it breached its containment and ran roughshod over the general populace. But it’s been out for decades and maybe some newer horror readers don’t know about it, so hell, I threw it on the list. Sue me! It’s one of the very best horror books you will read in your lifetime.