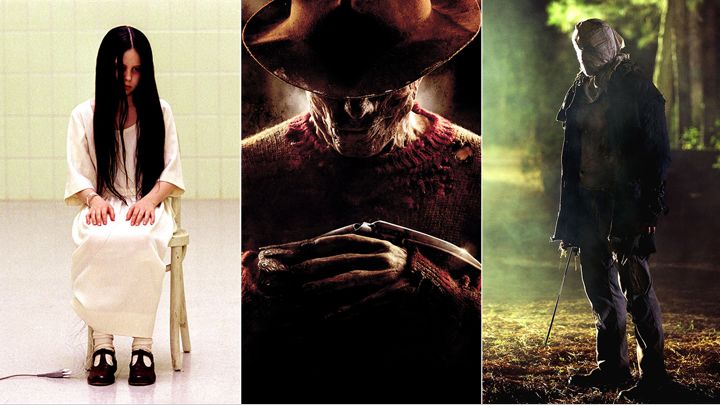 The Ring (2002)
A journalist (Naomi Watts) investigates a series of mysterious deaths and ends up wrangling with the curse of an evil videotape — the kind that, seven days after viewing, causes death by lanky-haired, double-jointed female ghosts.

Faithful to the original: Very. This is Japan’s Ringu in a highly Americanized version, big budget-ized with a marquee-name star and some suicidal horses thrown in.

Nostalgia factor: The U.S. version came out just four years after the ur-text for the modern J-horror boom dropped, so no attempt was made to throw back to the good ol’ days of 1998. That said, the movie is about a cursed VHS tape — so watching it now, the nostalgia factor is rather high.

Treatment of iconic villain: The original’s Sadako is a waterlogged ghost in the machine who can’t seem to keep her hair out of her face; the remake’s Samara is a full-on she-demon who much more believably stops hearts on sight.

Level/quality of kills: Samara basically scares people to death so there’s nothing too over the top or inventive here. But the distorted face of her victim in the closet is a thing of nightmares.

Scary: Surprisingly yes. Roger Ebert said that the story dips into “the dizzy realms of the absurd,” and he wasn’t wrong. Still, the unnerving visuals and atmospherics, as well as Watts’ bravura performance, manage to bypass the analytical center of most viewers’ brains and make skin crawl.

Gory: The view from the bar at your average sushi restaurant is gorier. Watts does take a dive into a well full of decades-old little-girl putrefaction, but even then most of the nastiness is implied rather than shown.

#TopTen US Grossing #Horror Titles. Our favorite is #9, what’s yours?